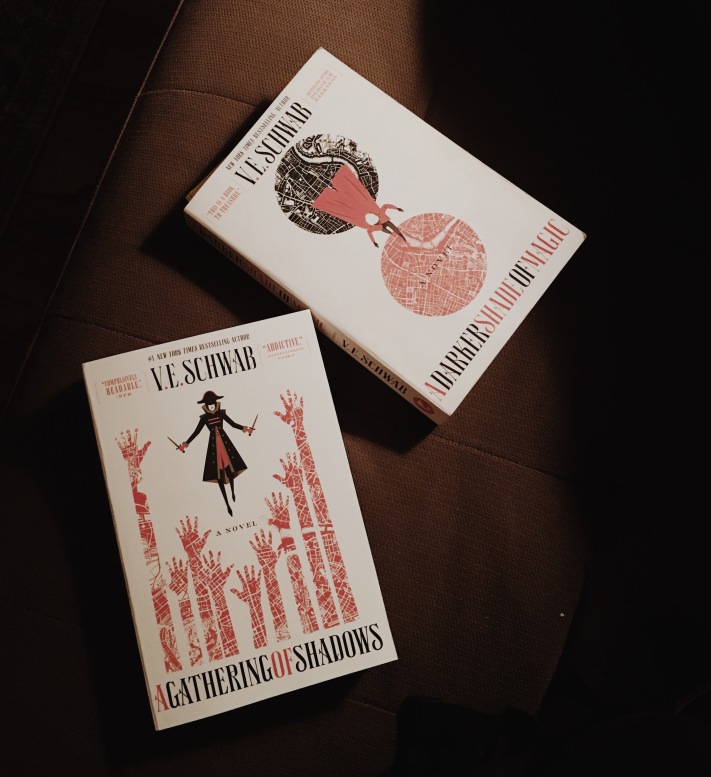 In the midst of current events, the one thing keeping me from going totally insane is…

In particular, V.E. Schwab’s urban fantasy series that begins with A Darker Shade of Magic.

The summary of that book, from Goodreads:

Kell is one of the last travelers–magicians with a rare, coveted ability to travel between parallel universes connected by one magical city.

There’s Grey London, dirty and boring, without any magic, and with one mad King–George III. Red London, where life and magic are revered–and where Kell was raised alongside Rhy Maresh, the roguish heir to a flourishing empire. White London–a place where people fight to control magic and the magic fights back, draining the city to its very bones. And once upon a time, there was Black London. But no one speaks of that now.

Officially, Kell is the Red traveler, ambassador of the Maresh empire, carrying the monthly correspondences between the royals of each London. Unofficially, Kell is a smuggler, servicing people willing to pay for even the smallest glimpses of a world they’ll never see. It’s a defiant hobby with dangerous consequences, which Kell is now seeing firsthand.

Fleeing into Grey London, Kell runs into Delilah Bard, a cut-purse with lofty aspirations. She robs him, saves him from a deadly enemy, and finally forces Kell to spirit her to another world for a proper adventure.

Now perilous magic is afoot, and treachery lurks at every turn. To save all of the worlds, they’ll first need to stay alive.

So, it sounds weird, which is probably why it took so long for me to read this after seeing everyone chatter about these books for so long. That, and the book starts off with a description of Kell’s coat, and clothes descriptions have never particularly interested me (in Game of Thrones I always skim those paragraphs). But that part does actually end up being both interesting and relevant, so I encourage you to pick up the first book in this trilogy. Why?

The Settings The descriptions of each of the Londons are just so well done. From Red London’s  bright, magical markets, to Grey London’s cold, depressing mundanity, to White London’s desperate, starved people, each London is rich and real and so much fun to spend time in.

Delilah Bard She’s not typical, not predictable, and oh-so-amazing. She makes me want to be a cross-dressing, pirate-loving, brassy pickpocketer, and that is something I’ve never aspired to be before. Every scene with her in it is delightful.

The Twists The story was utterly unpredictable, and each page keeps you guessing as to what will happen next.

The Villains So well-described, so interesting, and so terrifying.

Kell I liked the protagonist, I did. But he was just so … reserved, I suppose is the word. I feel like we were kept at slightly more of a distance from him than we were from Lila, which is why I related to her more. I’m more than halfway through the second book though, and I’m excited to see him opening up a little more.

… and that’s really it. This book was well-written and interesting and engaging and just what I needed right now. I’m due to finish the second one this week, and the third comes out next month, so I’m happy to report I have a good amount of time left in this world. And then I’ll probably move onto to Schwab’s other books, because I like her 🙂

7 thoughts on “MK’s Book Reviews: A Darker Shade of Magic”