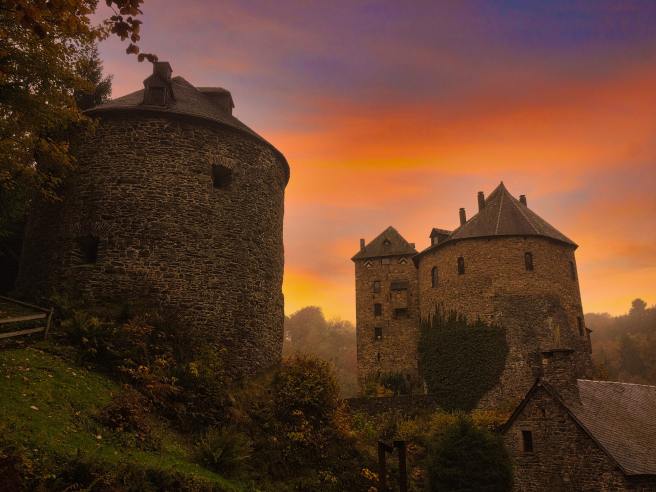 So I’m attempting to write a fantasy novel for the first time ever. Writing in this genre has its pros and cons.

Pros: I get to make up the entire world I’m writing about!

Cons: I have to make up the entire world I’m writing about…

The problem I’m running into is this: how to set my readers firmly in the world I’m creating while avoiding the dreaded “info-dump.”

In case you’re new to writing blogs, the info-dump is often listed as one of the top mistakes new writers make. Instead of starting the story in media res (in the middle of the scene), they start with:

“Once upon a time, there was a girl named Katniss Everdeen, who lived in District 12, made up of poor coal miners who never got enough to eat. Every year the children of the district had to participate in the dreaded Hunger Games, in which twenty-four children were forced to kill one another on television…”

If you’re writing fairy tales circa 1592, this could work. But in contemporary literature, it does not.

Setting the reader in your story–this actually applies to any story, not just fantasy stories and dystopians–needs to happen amongst the action. Think of it as instead of dumping a heap of information on your reader at once, you’re sprinkling it on them bit by bit. They should notice it, but it shouldn’t be so heavy that it takes away from the action of the story. You should be info-sprinkling, if you will.

Consider the opening to The Hunger Games (I cut out a couple of paragraphs for my example):

When I wake up, the other side of the bed is cold. My fingers stretch out, seeking Prim’s warmth but finding only the rough canvas cover of the mattress. She must have had bad dreams and climbed in with our mother. Of course, she did. This is the day of the reaping.

I swing my legs off the bed and slide into my hunting boots. Supple leather that has molded to my feet. I pull on trousers, a shirt, tuck my long dark braid up into a cap, and grab my forage bag. On the table, under a wooden bowl to protect it from hungry rats and cats alike, sits a perfect little goat cheese wrapped in basil leaves. Prim’s gift to me on reaping day. I put the cheese carefully in my pocket as I slip outside.

This is a brilliant example of info-sprinkling.

Here we’re dropped into the middle of a scene–a character rising and getting ready for her day (starting a story with a character waking up is also on the list of no-nos for beginners, but some people can get away with it. Here, it works beautifully.) But we’re given hints that this is not just any day–it’s the day of the reaping (aka the Inciting Incident). In these paragraphs, not only does Collins avoid the info-dump, but by not telling us everything all at once, she creates tension, which is after all the most important element in storytelling–the thing that gets us to keep reading. We want to know what the Reaping is. We want to know if it’s as bad as it sounds.

Our part of District 12, nicknamed the Seam, is usually crawling with coal miners heading out to the morning shift at this hour. Men and women with hunched shoulders, swollen knuckles, many who have long since stopped trying to scrub the coal dust out of their broken nails, the lines of their sunken faces. But today the black cinder streets are empty. Shutters in the squat gray houses are closed. The reaping isn’t until two. May as well sleep in. If you can.

This is also great. There is some straight up info given: “Our part of District 12, nicknamed the Seam…” but then it’s followed by a fantastic description of the place in which the protagonist lives: “hunched shoulders, swollen knuckles, etc.” You’re being shown these things, not told them. Then again, there’s mention of the reaping. But we’re still not told exactly what it is.

Instead, the scene unfolds, continuing to alternate exposition with action, the protagonist telling us bits about how she has to hunt to supplement her family’s food as she sneaks under the fence and out into the woods. Then, in the woods, she meets her friend Gale, where the author utilizes another great tool for world-building: conversation:

“Let’s fish at the lake. We can leave our poles and gather in the woods. Get something nice for tonight.”

Tonight. After the reaping, everyone is supposed to celebrate. And a lot of people do, out of relief that their children have been spared for another year. But at least two families will pull their shutters, lock their doors, and try to figure out how they will survive the painful weeks to come.

You do have to be careful to make the conversation realistic. Here, we have two characters who know exactly what the reaping is, so they just mention it casually: “get something nice for tonight”, and then in narration, Katniss explains what that means. It would be weird for Gale to then say, “As you know, Katniss, tonight is when everyone is supposed to celebrate…” Two characters who already know something wouldn’t talk about it like that. Using obvious conversation to world-build is amateur and clumsy. Don’t do it.

I could go on and on–the first chapter of The Hunger Games is an excellent example of how to build a world, not to mention write a brilliant opener–but you get the idea.

Any other first-chapter world-building tips I missed? Let me know!

Photo by Joran Quinten on Unsplash

4 thoughts on “Learning from the Masters: On World-Building”