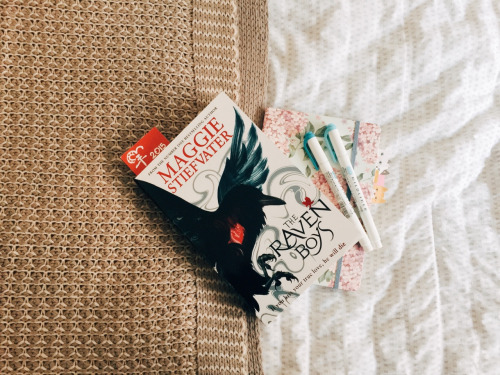 So if you follow me on Twitter or even read all my posts on this blog, you know I’ve been reading this and loving it.

I just finished it last night and…

I have mixed feelings.

First, the summary from Goodreads:

“There are only two reasons a non-seer would see a spirit on St. Mark’s Eve,” Neeve said. “Either you’re his true love . . . or you killed him.”

It is freezing in the churchyard, even before the dead arrive.

Every year, Blue Sargent stands next to her clairvoyant mother as the soon-to-be dead walk past. Blue herself never sees them—not until this year, when a boy emerges from the dark and speaks directly to her.

His name is Gansey, and Blue soon discovers that he is a rich student at Aglionby, the local private school. Blue has a policy of staying away from Aglionby boys. Known as Raven Boys, they can only mean trouble.

But Blue is drawn to Gansey, in a way she can’t entirely explain. He has it all—family money, good looks, devoted friends—but he’s looking for much more than that. He is on a quest that has encompassed three other Raven Boys: Adam, the scholarship student who resents all the privilege around him; Ronan, the fierce soul who ranges from anger to despair; and Noah, the taciturn watcher of the four, who notices many things but says very little.

For as long as she can remember, Blue has been warned that she will cause her true love to die. She never thought this would be a problem. But now, as her life becomes caught up in the strange and sinister world of the Raven Boys, she’s not so sure anymore.

Yeah, so it sounded weird. But I like weird, so long as it’s well-done.

The beginning hooked me:

Blue Sargent had forgotten how many times she’d been told that she would kill her true love.

Her family traded in predictions. These predictions tended, however, to run toward the nonspecific. Things like: Something terrible will happen to you today. It might involve the number six. Or: Money is coming. Open your hand for it. Or: You have a big decision and it will not make itself.

The people who came to the little, bright blue house at 300 Fox Way didn’t mind the imprecise nature of their fortunes. It became a game, a challenge, to realize the exact moment that the predictions came true. When a van carrying six people wheeled into a client’s car two hours after his psychic reading, he could nod with a sense of accomplishment and release. When a neighbor offered to buy another client’s old lawn mower if she was looking for a bit of extra cash, she could recall the promise of money coming and sell it with the sense that the transaction had been foretold. Or when a third client heard his wife say, This is a decision that has to be made, he could remember the same words being said by Maura Sargent over a spread of tarot cards and then leap decisively to action.

So I was interested. I like the paranormal, but I prefer it when the paranormal parts of the story are less than overt. Introducing the story with an interesting psychic family in a “little, bright blue house ” hooked me. And I really liked Blue, the weirdo daughter of the psychic:

So her family remained her closest friends, school remained a chore, and Blue remained secretly hopeful that, somewhere out there in the world, there were other odd people like her.

And then we’re introduced to the Raven Boys.

Confession: I have always loved prep school stories, going back to this tragic novel I first read in middle school. And the four Raven Boys in this story could have easily come off as clichéd–the rich, charismatic leader; the sullen bad boy; the poor scholarship student; the messy, playful one–but they don’t. They are each so well-drawn. I was immediately drawn into their worlds, their story.

This book is written in multi-POV third person, switching back and forth from Blue to the Raven Boys to the antagonist, and there’s so much tension waiting for them all to meet. I couldn’t read the story fast enough.

This is marketed as a paranormal YA romance. I’d argue the romance part is a lot subtler than the paranormal part, but still it’s there and it’s sweet:

She could tell that he was impressed with her in the way that men were usually impressed with Orla. Blue very much liked that, especially since she hadn’t had to do anything other than be herself to earn it.

Then we’re introduced to the legend part–and it’s a Welsh legend. I read this book as a child and immediately become obsessed with Wales. I asked my parents if I could take Welsh lessons. I asked if we could take a family trip to Wales. I wanted to take up the harp. (None of these things happened, unfortunately.)

Also, the writing in this book is beautiful:

Gansey had once told Adam that he was afraid most people didn’t know how to handle Ronan. What he meant by this was that he was worried that one day someone would fall on Ronan and cut themselves.

He mused that there was something musical about Ronan when he swore, a careful and loving precision to the way he fit the words together, a black-painted poetry.

So, yeah. Putting down this book was agony.

The beginning to middle of this book was amazing. I was sure I’d be giving it ten stars. So sure that I went out and bought the sequel mid-way through.

But then I started getting closer and closer to the end of the novel … and I got worried. There were tons of things left to resolve, and not enough time to resolve them.

Then there were some strange plot twists. One I did not see coming (no spoilers) but I was okay with it. Then a bunch more weird things happen. This is all fine–it’s paranormal, after all–but what I didn’t like was how fast things started to roll with not enough impetus or explanation. Entire scenes were skipped–we’re just told in summary what happens–and then the climax moves so fast I felt like I had to go back and read it twice to figure out what exactly had happened.

So I guess I shouldn’t have been surprised when not very many of the book’s major questions were answered. It ended on a cliffhanger.

I have mixed feelings about ending books in series on cliffhangers. Of course, the author should always have written well enough to want you to go out and buy the next book, to see what happens next in the story. But I think each book should also be able to stand alone (Harry Potter is a brilliant example of this). This book can’t really stand alone. You have to read the next book–then I’m guessing, the third–to find out what happens.

I decided on a rating of  9/10 I did love this book. The writing and the characters were superb. But the story, and then the ending, left much to be desired.

That being said, I just started the second book. And if all goes well, I’ll be acquiring the third shortly 🙂

UPDATE: It’s two weeks later and I’ve finished the third book and I’m in love with this story, this world, these characters. Yes there are cliffhangers and yes there is bizarreness and yes there is not enough explanation for these things, but it doesn’t matter because I love these books and the fourth one needs to come out ASAP!

I miss Paris.
from which they never recovered #fscottfitzgerald
“On Bier’s End, there were summers when nothing happened, and summers when everything did.”
To set a story here someday (📸: @bokehm0n)
#writerswrite (📸: @austinkleon)