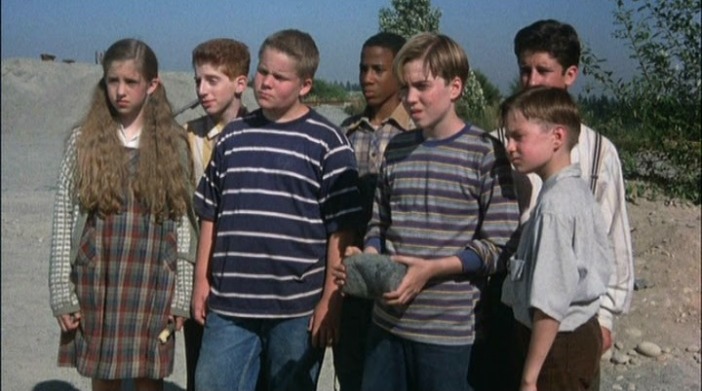 I am not a horror fan, not a violence fan, and definitely not a clown fan.

Why did I read this book?

Well, for starters, it was written by Stephen King, writer of two of my favorite books of all time. Secondly, a good friend of mine (artist of this lovely drawing) told me I would like it.

My feelings are a bit more complicated than liking and not liking. So here I’ll attempt to sort through them.

First, the summary from Goodreads:

To the children, the town was their whole world. To the adults, knowing better, Derry, Maine was just their home town: familiar, well-ordered for the most part. A good place to live.

It was the children who saw – and felt – what made Derry so horribly different. In the storm drains, in the sewers, IT lurked, taking on the shape of every nightmare, each one’s deepest dread. Sometimes IT reached up, seizing, tearing, killing . . .

The adults, knowing better, knew nothing.

Time passed and the children grew up, moved away. The horror of IT was deep-buried, wrapped in forgetfulness. Until they were called back, once more to confront IT as IT stirred and coiled in the sullen depths of their memories, reaching up again to make their past nightmares a terrible present reality.

So of course, despite my reservations, I was intrigued. I love stories that harken back to childhood (I’m writing one right now), stories of people with strong ties to one another coming back together after a long time apart. I do not love horror. But I let the former outweigh the latter.

I’m glad I read this, and here’s why:

1. The Characters All you really have to do to suck me into a novel is present me with well-written characters. I loved the Losers Club, with each kid an outcast in his or her own way, and how much they loved each other. The Losers Club are:

Bill–Their Stuttering Leader
Richie–The Jokester With the Glasses
Eddie–The Sick Weakling With A Pure Heart
Ben–The Smart, Fat One
Stan–The Smart, Jewish One in a Disturbingly Anti-Semitic Town
Mike–The Smart, Black One in an Even More Disturbingly Super-Racist Town
Beverly–The Only Girl (For Some Reason) Who Is a Poor Tomboy But Is Also Stunningly Beautiful

These characters were fantastic. Though I don’t understand why there couldn’t have been more than one girl. And why the girl just has to be gorgeous. But the bond between them was enough to keep me reading.

Maybe there aren’t any such things as good friends or bad friends – maybe there are just friends, people who stand by you when you’re hurt and who help you feel not so lonely. Maybe they’re always worth being scared for, and hoping for, and living for. Maybe worth dying for too, if that’s what has to be. No good friends. No bad friends. Only people you want, need to be with; people who build their houses in your heart.

2. The Writing As always, with King, this was beautifully written, though a bit over-written at times. You really get the feeling he knows how small towns in Maine work. Because he does. King is a brilliant example of Write What You Know.

But still, sometimes, in the heart of winter when the light outside seemed yellow-sleepy, like a cat curled up on a sofa, when Mrs. Douglas was droning on about mathematics or talking about tin deposits in Paraguay, on those days when it seemed like school would never end and it didn’t matter if it didn’t because all the world outside was slush … on those days Ben would sometimes look sideways at Beverly, stealing her face, and his heart would both hurt desperately and somehow grow brighter at the same time.

3. The Scenes Some of the scenes were just so, so great. Hard to pick just one, but the epic rock fight has to be my favorite. David triumphs over Goliath, justice is served, at least for one day. I’d have been happy if the novel ended with another rock fight.

Best not to look back. Best to believe there will be happily ever afters all the way around – and so there may be; who is to say there will not be such endings? Not all boats which sail away into darkness never find the sun again, or the hand of another child; if life teaches anything at all, it teaches that there are so many happy endings that the man who believes there is no God needs his rationality called into serious question.

4. The Nostalgia I guess I’m old enough that all the nostalgia for childhood really struck a nerve with me. I am a sucker for it and it crops up repeatedly in my own writing. I love the way these children came together that one, horrifying, magical summer and I love the way they come back together as adults.

And maybe, Richie thinks, that’s the scary part. How you don’t stop being a kid all at once, with a big explosive bang, like one of that clown’s trick balloons. The kid in you just leaked out, like the air out of tire. And one day you looked in the mirror and there was a grownup looking back at you.

It doesn’t matter, Ben. The love is what matters, the caring … it’s always the desire, never the time. Maybe that’s all we get to take with us when we go out of the blue and into the black. Cold comfort, maybe, but better than no comfort at all.

Then there were some things I did not like.

1. It was too long. This, more than anything else, took away from the overall enjoyment of the novel for me. There were sections that could have easily been cut down or taken out altogether, sections that did not add to the story at all. I did like some of the historical interludes, showing how IT has been a part of Derry for ages–the story about The Black Spot was particularly interesting (and horrifying, of course)–but others (such as the lumberjack union one) were just overwrought and took away from the main story. King also just goes on waaaaay too long about certain things, and not just the gross things (Mike’s enjoyment at planting crops with his dad, Eddie’s medicine cabinet, etc.) Just get on with the damn story.

2. The human villians were just too villianous. There were no real shades of gray for Henry Bowers–perhaps the abuse at the hands of his father, but they were both so just despicable, you really didn’t feel very bad for either of them at all. And Patrick Hockstetter… shudder shudder shudder ugh I need to go shower.

3. The ending. I know King is not great with endings in general (see Stand, The–I’ll get around to reviewing it at some point) but the ending of this one was just so … bizarre. The revelation of what IT really was, the amount of time it took them to get through those damn pipes. And then the very end, I absolutely hate how …. but no spoilers.

4. The deus-ex-machina parts of the novel. Oh let’s just get this handy magical vision that we need to build this smokehouse. Oh hey, this bullet magically swerved to hit its mark. (This is also a problem in The Stand.)

5. The unnecessarily extremely sick, sick parts of the novel. If you want to skip over those, I suggest not reading any scenes with Patrick Hockstetter (shudder shudder ugh off to shower again). Also, the scenes with the racism were just so, so awful, not least because things like that actually used to happen. And there is one beyond strange scene near the end of the 1958 part that most disturbingly of all I think is meant to be a good thing. But these kids are only eleven. You cannot sexualize eleven-year-olds and have it be a good thing. No no no no no.

Overall, King’s stories are always good reads because he’s such a talented writer and has such a way with characters and world-building. But this one could have been tightened up so much more, which would have made it so much better. And I could have done without some of the grossness.

But still, these characters will haunt me for a long time.

Drive away and try to keep smiling. Get a little rock and roll on the radio and go toward all the life there is with all the courage you can find and all the belief you can muster. Be true, be brave, stand.