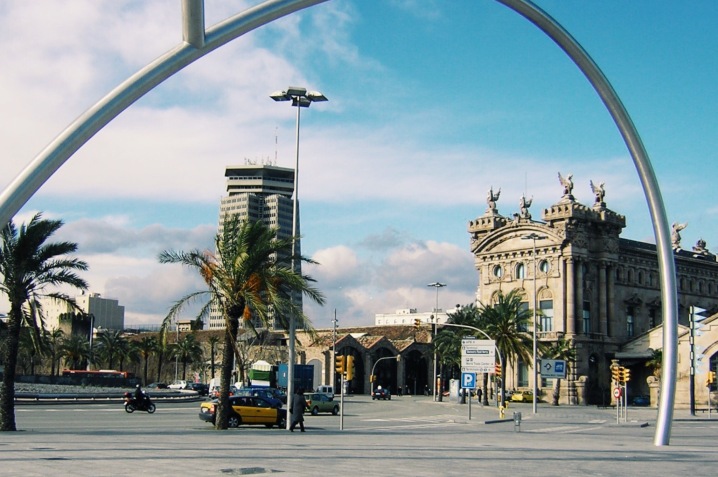 I’m continuing my series of travel essays this week with a story about Barcelona, otherwise known as the city in which I did not sleep.

“There are three spots open on this Barcelona trip next weekend. Wanna go?”

That’s how my two American friends and I found ourselves not sleeping on an overnight bus to Barcelona with a bunch of French students a mere three weeks after we’d arrived for our study abroad semester in France. We were going with the Spanish department of the French university we were attending, to a city where Spanish isn’t even the primary language. All because we had followed the essential rule of travel (don’t ask why, ask why not).

We rolled up to a cute little boutique hotel in the wee hours of the Barcelona morning, and were put in a hotel room with three French girls we’d never met. They were friendly enough, though they balked a bit at our yet-to-be-refined French-speaking skills and our inability to shower in a curtainless tub without soaking the entire bathroom. (It’s hard.) No time for sleep that day–our French professor tour guide ushered us immediately to breakfast (the croissants in Spain are not as good as the ones in France; have the tortilla instead), then endured an entire day of museum-hopping and sightseeing–in an odd mixture of French, Spanish, and Catalan that we barely understood–before dragging ourselves back to the hotel that evening.

“We can’t just go to sleep,” one of us said, though that was exactly what we all wanted to do. “We’re in Barcelona. We have to go out.”

And so, after eating the cheapest dinner we could find (at McDonald’s) (we were students on a very strict budget), we wandered into a bar down the street where we promptly found ourselves in the middle of a “stag weekend”. Which we would soon learn was British for “bachelor party”. I don’t entirely remember how we ended up fully a part of this group of gentleman, but we did, following them from bar to bar to club, laughing our never-been-outside-the-US heads off at their accents and slang (“We’re having a top-drawer time, girls, really top-drawer”) and finally collapsing into our beds back at the hotel around 5 AM with promises to meet the guys out again the next night.

Two hours later, we were awoken rather abruptly by our French professor tour guide to start Day 2 of sightseeing.

“We have to go,” we groaned. “When’s the next time we’re going to be in Barcelona?”

“Also, we already paid for it.”

It was that, more than anything, that got us out of bed after two hours of sleep, had us drenching the bathroom in our showering attempts and shoveling down more tortilla, then saw us stumbling, yawning, onto the tour bus.

Gaudi, Picasso, that little gondola that takes you up the side of that cliff overlooking the sea–I doubt there was anything in Barcelona we didn’t do between those two days. We spent that day in a sleepy haze not unlike being slightly drunk, but enjoying ourselves nonetheless. However, it was clear we weren’t going to make it out that night without a little siesta. Back at the hotel that evening, we set our alarm for 10 PM (an appropriate dinnertime hour in Spain) then promptly passed out.

Only to wake up at 1 AM with the realization that our alarm hadn’t gone off.

“We missed the night!” we exclaimed. We sat on the edges of our beds, bleary-eyed and bummed.

“We should probably just go back to sleep,” one of us said. “We need sleep.”

“Wait,” said another one of us. “Last night we didn’t even get to that last place til 3.”

“We could probably still find them.”

We looked at each other.

So we got ready and headed out to the bar at 2 AM.

“You made it!” our new British friends exclaimed. “We were getting worried.”

What followed was one of the most random and interesting nights of our lives. Between bargaining our way into a club because we didn’t have enough euro, accidentally dancing with some prostitutes, stealing the blankets off our hotel beds so we could bring them to the beach along with a bottle of Bailey’s (why Bailey’s? I’m not sure) to watch the sun rise, the wee hours of that Barcelona night flew by, and we soon found ourselves back in front of our hotel, clutching onto our new British friends and  swearing up and down that we would be in touch, that we would all stay friends forever. (We never saw them again.)

As soon as we were done with our good-byes, the hotel door opened, and our French professor tour guide popped out, his eyes wide. “The bus is leaving in ten minutes, les filles!” he exclaimed. “Hurry, hurry!”

We ran inside, threw our stuff in our bags, and did not even have time for breakfast tortillas before hurtling ourselves onto the idling bus just before it pulled away, taking us out of Barcelona forever.

Even though we were leaving the city that really never sleeps, our tour wasn’t over. We still had a full day of stopping at museums and other interesting sights before we were due to hit the French border later that afternoon.

“Do you think they’ll just let us stay on the bus and sleep?” we asked.

“But how are we supposed to get through this day when we didn’t sleep?”

One of us just shrugged. “We can sleep when we’re home.”

And that’s precisely what we did.

Image of Barcelona, Spain, taken by me, February 2004.

from which they never recovered #fscottfitzgerald
“On Bier’s End, there were summers when nothing happened, and summers when everything did.”
To set a story here someday (📸: @bokehm0n)
#writerswrite (📸: @austinkleon)